With the chillier weather here, we are plugging in our kettle. Warm your hands on this little toddy. 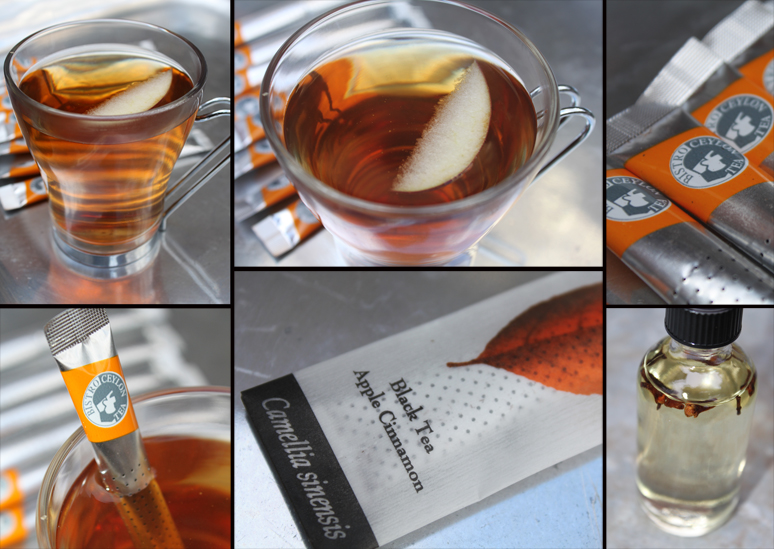 Pour boiling water into heatproof glass or mug. Place bistrotea pod in water and let steep for 3 - 5 minutes (stirring pod quickens process and intensifies flavours). Once tea is at your preferred strength, add proof whisky, simple syrup and lemon. Garnish with cinnamon stick or apple slice. (NOTE bistrotea pod can be used to make a few cups of tea)

clove simple syrup Combine equal parts sugar and boiling water. Stir until sugar is completely dissolved. Pour into a jar or bottle with a lid and drop in a pinch (5-6) of cloves. Let cool and store in the refrigerator for up to 2 weeks.

Bistrotea uses tea leaves. Most traditional tea bags contain floor sweepings and tea dust. The TPOD concept favours the pouching of premium tea leaves which can be enhanced with natural tea extracts or FTNF flavours. Tea leaves absorb the fragrance and flavour from its natural surroundings, therefore to enjoy a fine cup of tea always use neutral utensils.

Bistrotea is simply smart ...it enables proper dosage without wastage, it doesn’t drip neither does it need wringing! It is also a perfectly well designed stirrer.
Bistrotea (QTPOD©) is dressed in a soft unique translucent envelope which is not only aroma and fragrance protective but also moisture-proof and tear resistant. (http://www.bistroteacanada.com) 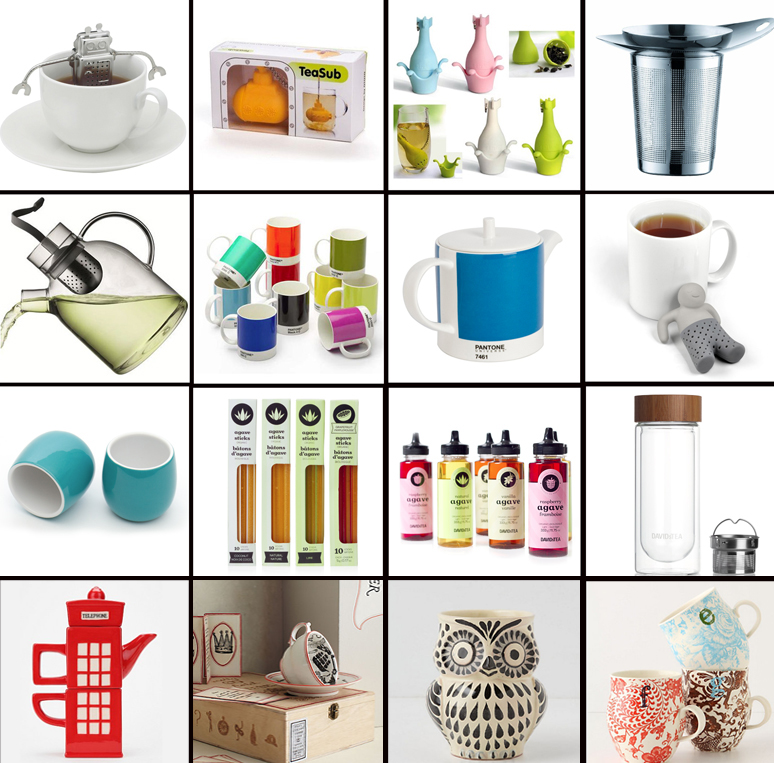 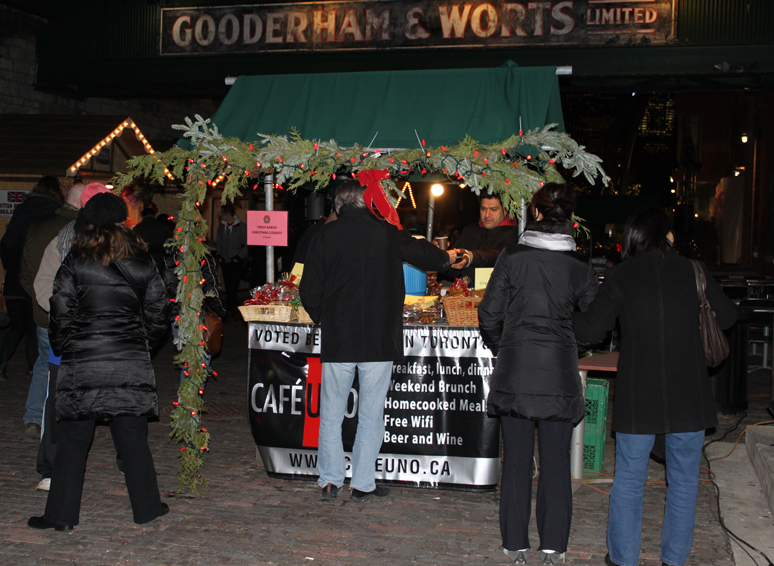 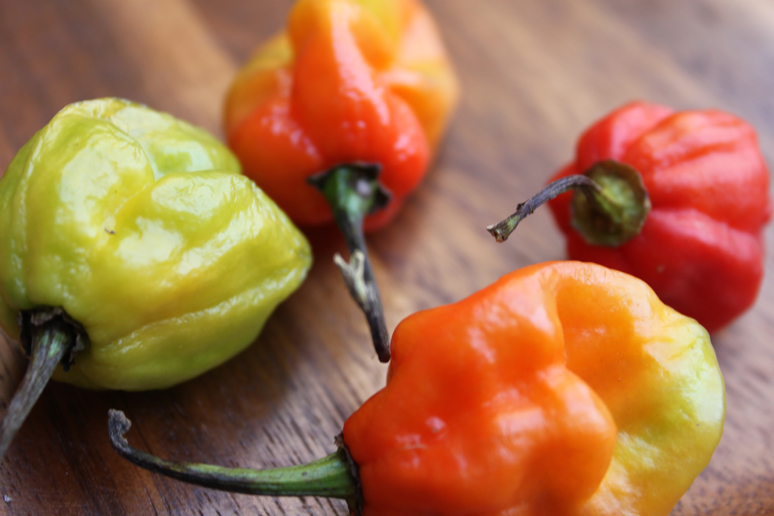 Happy US Thanksgiving! Don't forget to skip off work today to watch the 86th Macy Day Parade.
Thinking of getting the bros (or sisters) together on Sunday for the 100th Grey Cup in Toronto? We have a couple of hot new recipes to take you through halftime. 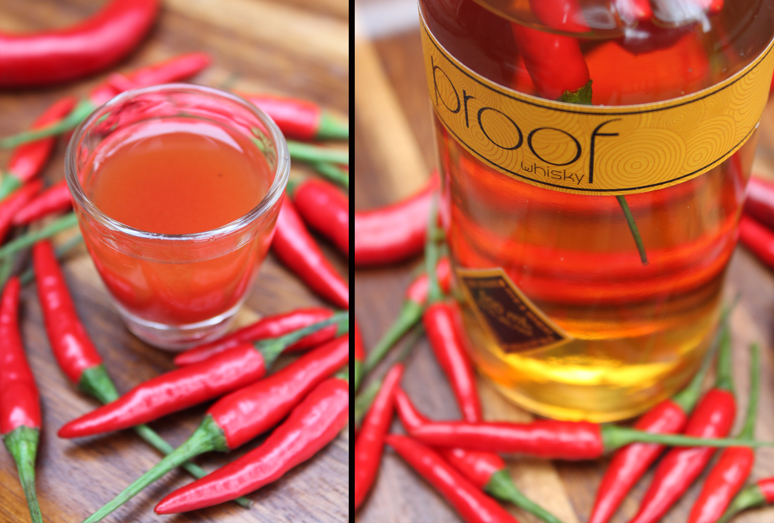 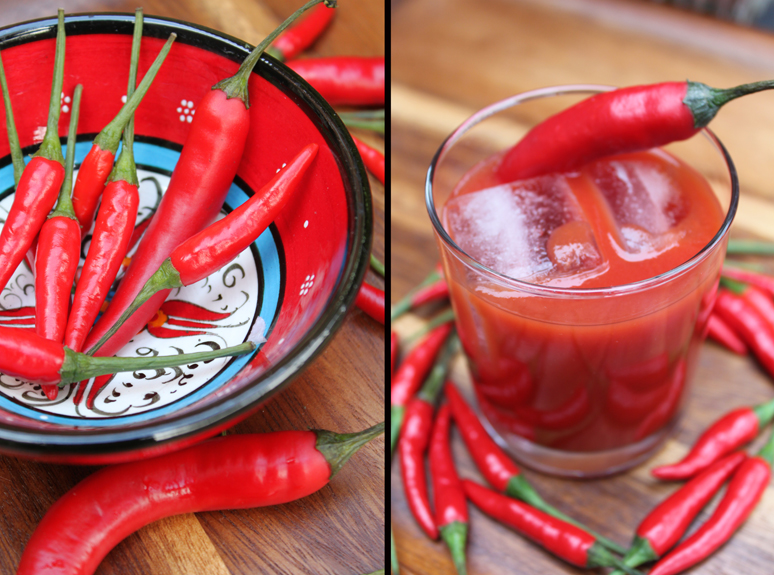 And, if you want to make it to the end of the game
the smokin’ mary  1 1/2 oz pepper-infused proof whisky • 4 - 5 oz tomato juice • 1 dash liquid smoke
Pour all ingredients into an ice-filled glass. Stir and garnish with pickled pepper. 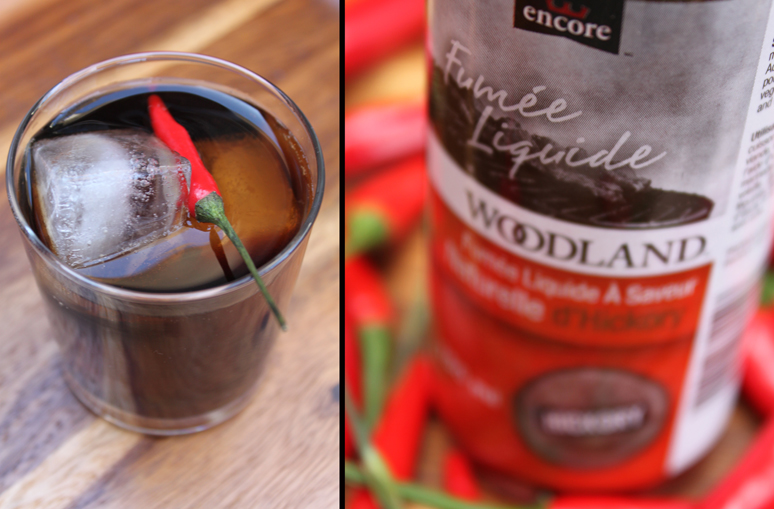 If you are more sweet than savoury, here’s a little twist on the rye & coke
the smoke & coke 2 oz proof whisky • 5 oz coca-cola • dash of liquid smoke • lemon wedge for garnish
Add proof whisky to a tall glass filled with ice. Add the coca-cola and liquid smoke and stir. Garnish with lemon wedge and pepper. (http://www.tasteofwoodland.com) (we picked up the smoke at McEwan's) 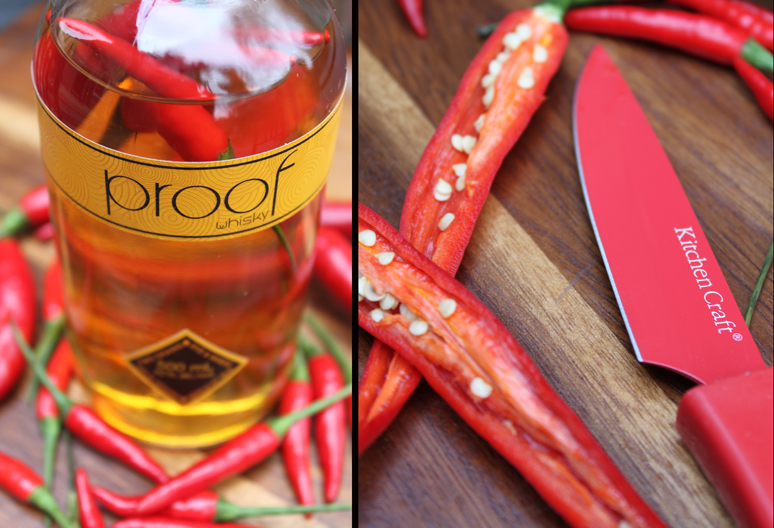 pepper-infused proof coarsely slice one jalapeno pepper. (or other pepper of choice) Remove seeds. Add to a new bottle of proof whisky. Let sit 4-12 hours. (depending on how many taste buds you want remaining afterwards – you can taste it after 4 hours) Try a variety of peppers, depending on the heat and flavours that you like. We also like smokiness of the chipotle pepper. 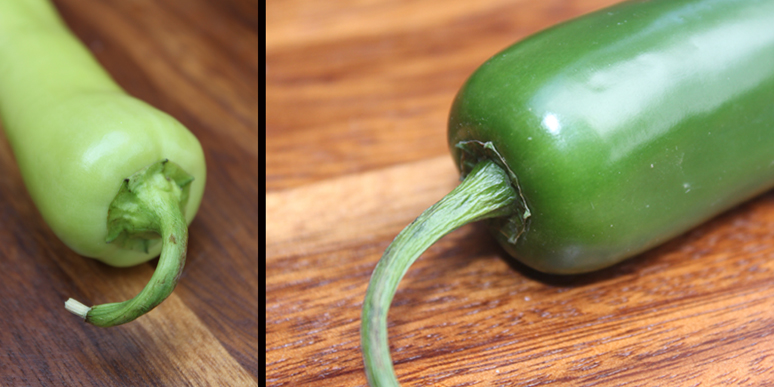 choose your heat  (we’ve listed these from mildest to hottest)

bell peppers, which can be red, yellow, green or orange, aren't hot peppers. They are very common sweet peppers.

cherry pepper (also known as pimento peppers) are heart-shaped and are about four inches long and three inches wide. These peppers are actually very mild. Cherry peppers are perhaps best known to be the red filling that can typically be found inside of olives.

ananheim pepper is another mild type of pepper. This pepper is usually maroon in color and has a long, skinny body. Relative to the rest of this list, this pepper is not very hot.

jalapeno pepper is one of the most common types of peppers in North America. Many people like this type of pepper because of its spicy yet not overwhelming taste. Jalapeño are usually either red or green and are about two to three inches long. These peppers, when used sparingly, add just the right amount of spicy flavor to most Mexican dishes. The chipotle pepper is actually a smoked or dried jalapeño pepper.

serrano pepper is similar to the jalapeño in its look, but this pepper is much hotter. This pepper is usually small (around two inches) and green in color. As a general rule of thumb, the smaller the Serrano pepper, the hotter it will taste.

cayenne pepper is another hot pepper that is popular with those looking to add heat to food. Red in color, the Cayenne pepper is generally dried and used in powder form.
tabasco pepper is used to make Tabasco sauce. If you've ever tasted how hot Tabasco sauce is, you won't be surprised to learn how hot the Tabasco is. The actual pepper is less than two inches long and can be green, red, yellow or orange in color.

thai pepper Grown in Thailand and neighboring countries, the Thai pepper is a type of pepper that can be classified as "very hot". These peppers are sure to leave your taste buds wanting relief. The Thai pepper is one of the smallest peppers, measuring in at less than an inch. It's used in many spicy Thai dishes.

habanera chili pepper The Habanero chili is recognized as the hottest. This pepper, which can be any color from green to yellow to pink, is usually only around three centimeters in length.

ghost pepper Also known as Naga Jolokia, this pepper is literally the hottest pepper in the world. The Guinness Book of World Records recognized the Ghost pepper in 2006. If you get your hand on a Ghost pepper, be sure to be extremely careful because one seed from this pepper will have your mouth burning for up to thirty minutes. 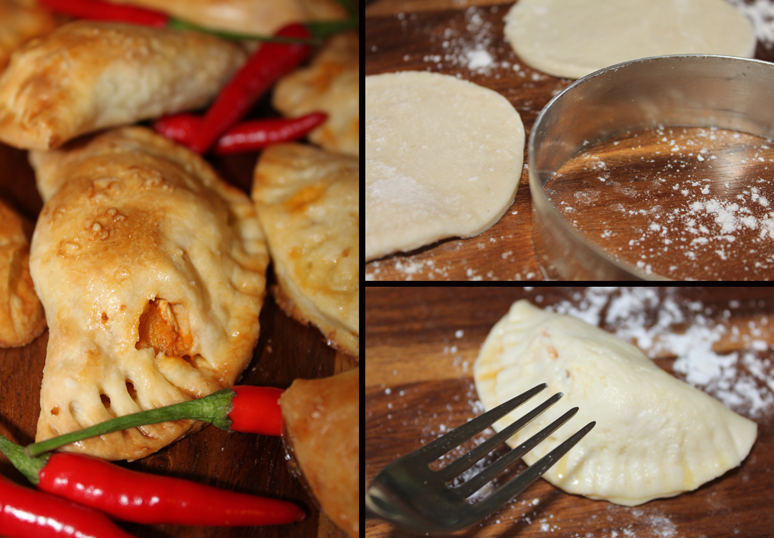 Try serving something other than pizza or subs this year. These empanadas are great because they are make ahead, versatile and easy to eat if your guests do not want to leave the La-Z-Boys.

empanada dough 1 cup milk • ½ cup melted butter • 2 2/3 all-purpose flour • 1 ½ tsp baking powder • ½ tsp kosher salt
Whisk together milk and melted butter in a bowl. In a second bowl, sift all dry ingredients. Pour butter mixture in with dry mixture and stir with wooden spoon. If sticky, add a little extra flour. Batter should not be sticky. Cover with plastic wrap and refrigerate for an hour or overnight. When filling is ready and cooled, remove dough from fridge. Roll out and cut into 3” - 4” rounds. Scoop 1 - 2 tbsp of filling in centre. Brush edge with beaten egg yoke and fold in half. Crimp edges with fork. Place on baking sheet and brush with egg yoke. Cook for 25 minutes or until golden brown at 350 degrees. 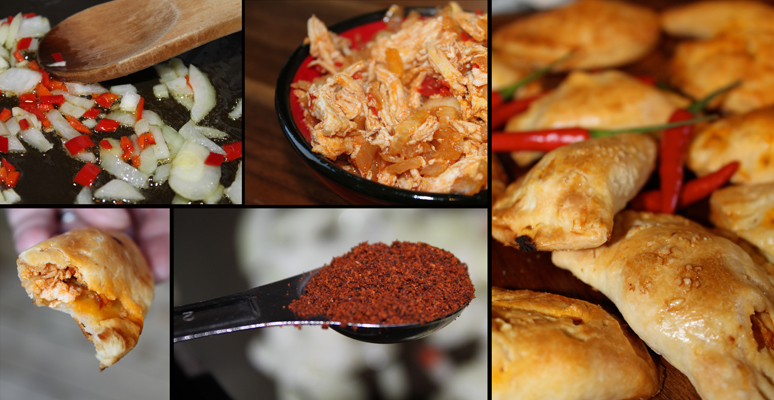 Heat olive oil over medium heat. Add in onions, chilies, paprika, cumin and honey. Sauté for 10 minutes until onions become translucent. Add in chicken, olives, eggs, water and salt and pepper to taste. Remove from heat and allow to sit for 30 minutes before adding to empanada dough circles.

We made the spicy chicken, but you can try beef, squash, black beans and cheddar, chorizo and manchego, bacon and egg or many other recipes. (www.epicurious.com)

And if baking is not your thang, head over to M & M Meats for your nibblies. They have just launched a Bacon Wrapped Jalapeño Shooter. (www.mmmeatshops.com)

Join proof whisky, starting tonight, at Steam Whistle Brewery for a weekend-long party!! From November 23 thru to November 25, meet and mingle with CFL Legend CONDREDGE HOLLOWAY as he plays host to a Star-Studded line-up of CFL greats, including TONY GABRIEL and WARREN MOON, who will be making his ONLY SCHEDULED appearance in Toronto. More special guests will be announced daily. 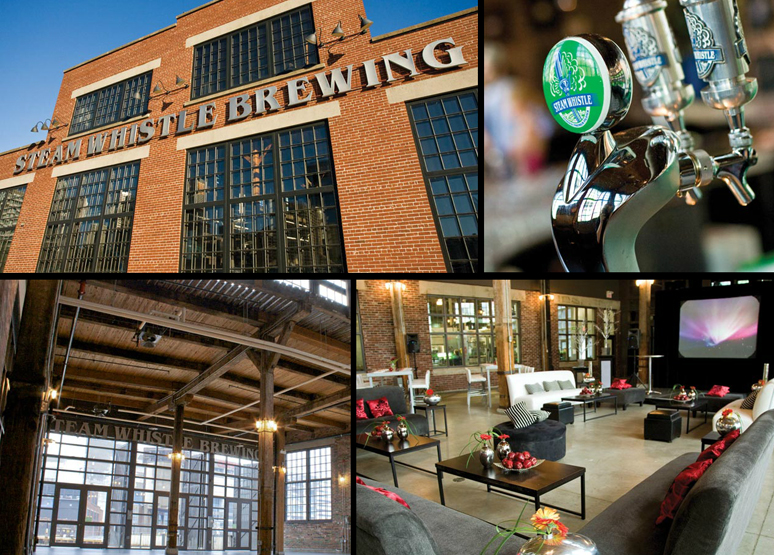 Afterwards, head downtown for more festivities at the 100th Greycup Celebration.
The 100th Grey Cup Festival is excited to announce a line-up of free concerts taking place on the OLG Stage smack in the middle of all of the action at the TELUS Street Festival.  With over 20 bands performing over three days from Friday, November 23 – Sunday, November 25, the Festival Committee is thrilled to give back to the fans and the City of Toronto by presenting such a high calibre of talent, including OUR LADY PEACE!! Grey Cup Lineup! 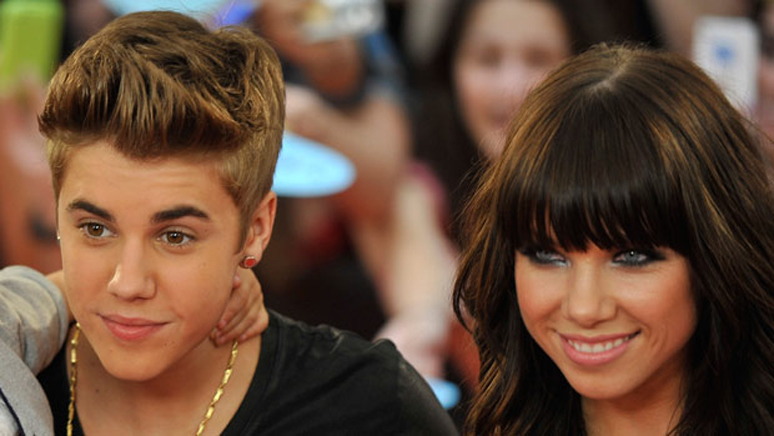 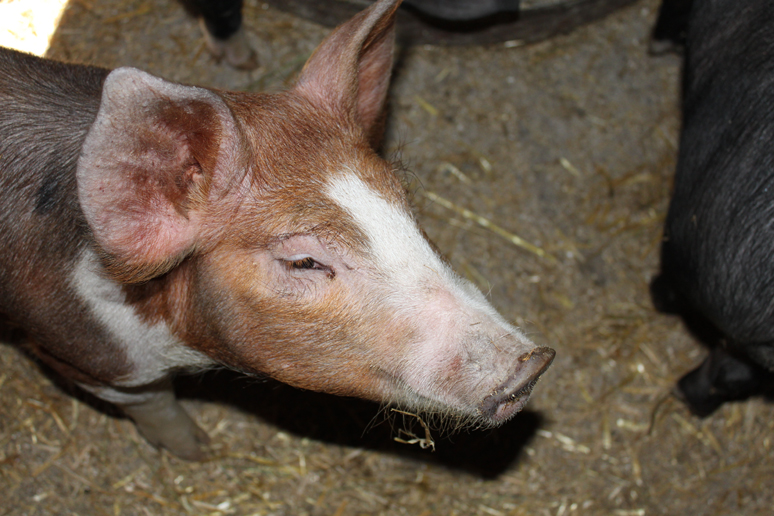 Several weeks ago, we asked you to submit your favourite proof concoctions – thank-you so much, for sharing your great recipes. Today, we are featuring our favourite drink submission. This awesome recipe and photo were lent to us by a very loyal proof whisky customer. Thank-you Jean François Pagé, for this, and many other delicious contributions. You chose Michael’s favourite food as your ingredient – bacon.

bacon-infused proof whisky Jean François - "so it's pretty simple, actually. Prepare 6-8 strips of thick-cut applewood smoked bacon, remove bacon and pour the drippings straight into the Proof bottle (a funnel comes in handy here). Use bacon for whatever you like (attached pic is a goat cheese stuffed date wrapped in bacon) or overcook it and let dry for garnish. Should be, roughly, 1 part bacon fat 10 parts whisky. Stick the bottle in the freezer, upside down. The fat will separate and rise to the top (bottom) of the bottle overnight. Then simply pour whisky through a thin mesh strainer (might have to double strain to get rid of residue) and into a spare proof bottle and voilà, proof bacon. It's got a sticky but not fatty mouthfeel, and adds a real pop."

Jean François did not lend us his goat cheese-stuffed recipe, but we managed to find a great recipe at www.epicurious.com 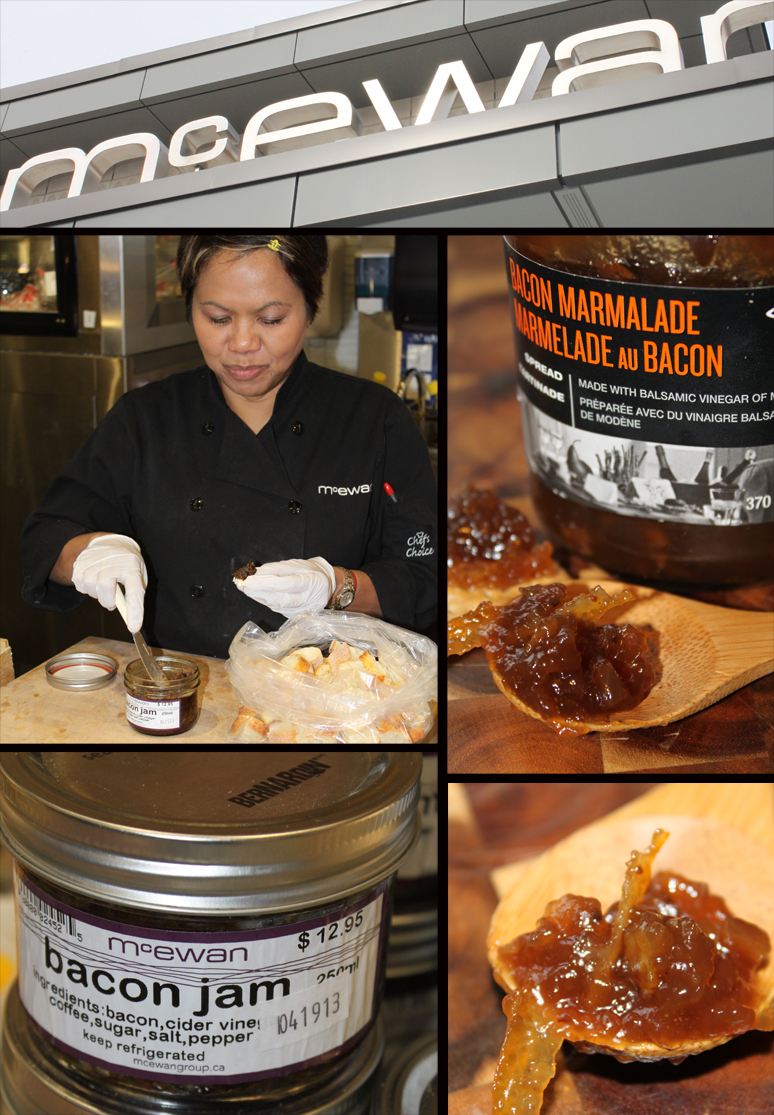 We had bacon on the brain this past weekend, so we decided to hit a few specialty shops in Toronto to find some bacon products. We were most successful at McEwan’s (http://mcewan.mcewangroup.ca), where we found Mark McEwan’s very own delicious bacon jam. Unlike the President’s Choice bacon marmalade (which is still pretty good), this one is chock full of bacon and has very few other ingredients. 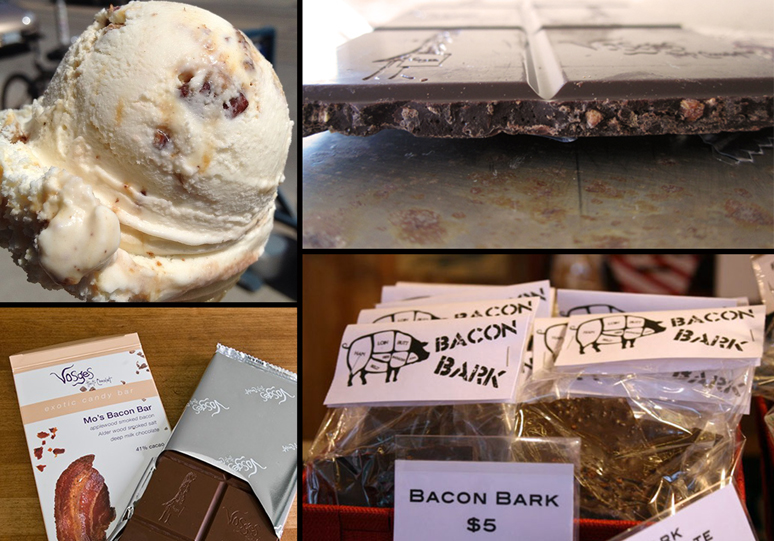 You will find many other products online if you search. What about trying Ed’s Real Scoop maple-bacon ice-cream in Leslieville (www.edsrealscoop.com), Chocolate Bacon Bark at the Distillery Christmas Market, which opens November 30th (http://torontochristmasmarket.com) or Vosges bacon chocolate. Here are a couple of links to get you started.(http://skilletstreetfood.com, http://www.vosgeschocolate.com, 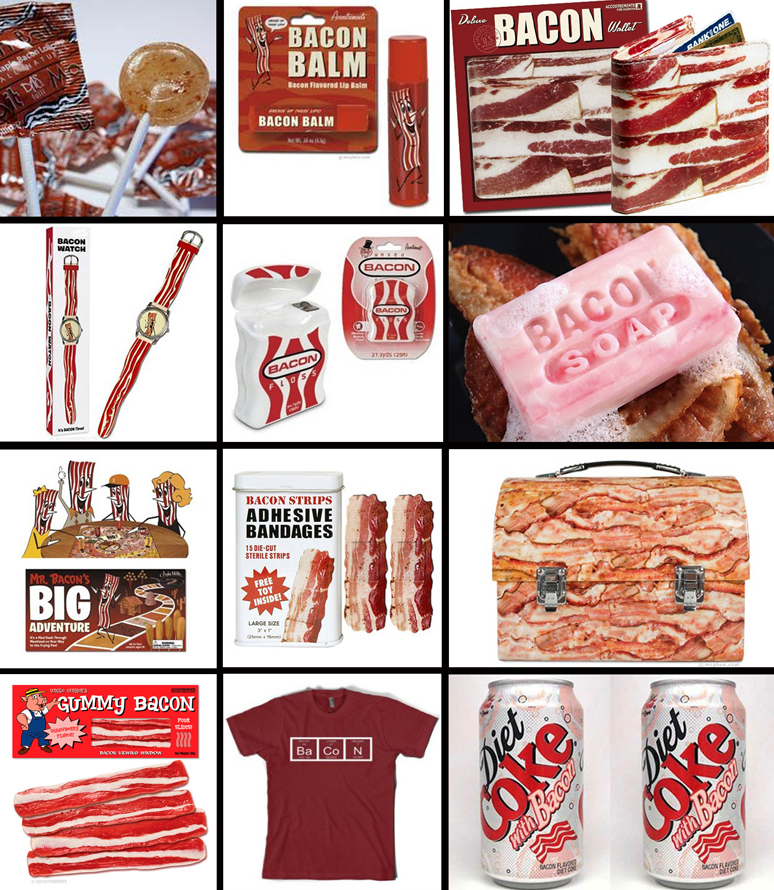 Bacon doesn’t only have to be an edible indulgence. There are many funny & quirky bacon-themed gifts on the market. (http://www.thinkgeek.com, www.amazon.com (Amazon has a good selection of fun bacon-themed gifts) 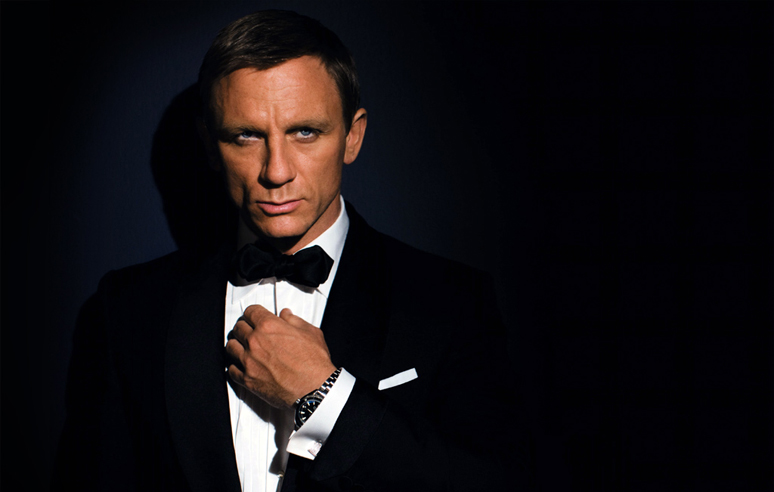 Today, we are paying tribute to the world's most iconic movie brand and its influence on art, music, lifestyle, automotive design, travel, technology and fashion over the course of five decades. 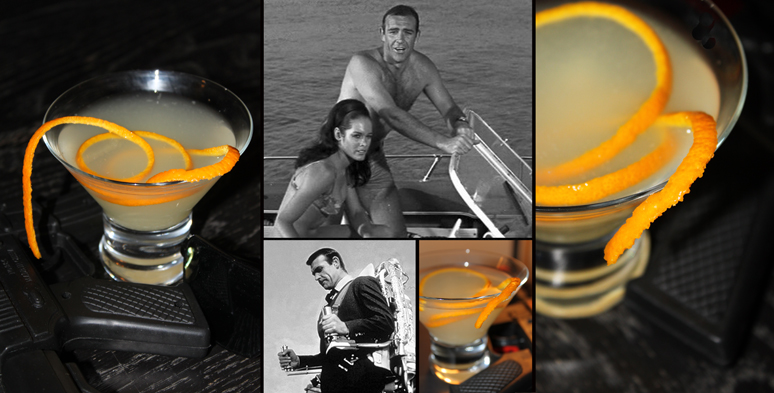 If you are a Bond fan, or simply someone who appreciates impeccable style, this exhibit is a must-see. Designing 007 - Fifty Years of Bond Style opened at TIFF’s Bell Lightbox (its first North American stop) last week with previously unseen costumes, lavish recreated sets, iconic gadgets, props, original photographs and concept drawings are set to thrill audiences in celebration of half a century of the most charming and sophisticated of secret agents 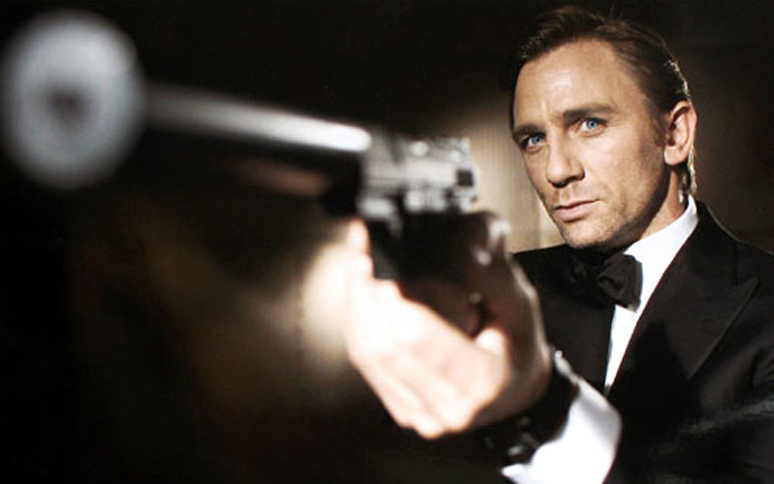 Highlights from the exhibit include the steel teeth worn by Richard “Jaws” Kiel in The Spy Who Loved Me (1997); storyboards for Diamonds are Forever (1971); the Anthony Sinclair overcoat worn by Sean Connery in Dr. No (1962); the poker table from Casino Royale (2006); multiple gadgets from Q Branch including the attaché case given to Bond in From Russia With Love (1963); and the 1961 United Artists/Eon Productions contract to produce the James Bond film series. (http://tiff.net) 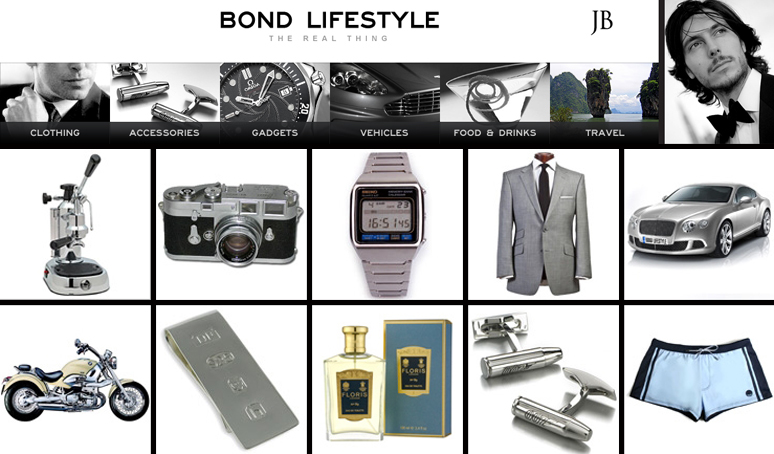 Now that Halloween is over, we can start thinking about Christmas shopping. Any purchase inspired from this luxury website will definitely put you in his good books. The Bond Lifestyle website was founded in October 2005 by Remmert van Braam, in order to make an informational website about the products and brands that are used by the fictional character James Bond in movies and books. Since then, the site has become the second most visited Bond website in the world. (http://www.jamesbondlifestyle.com) 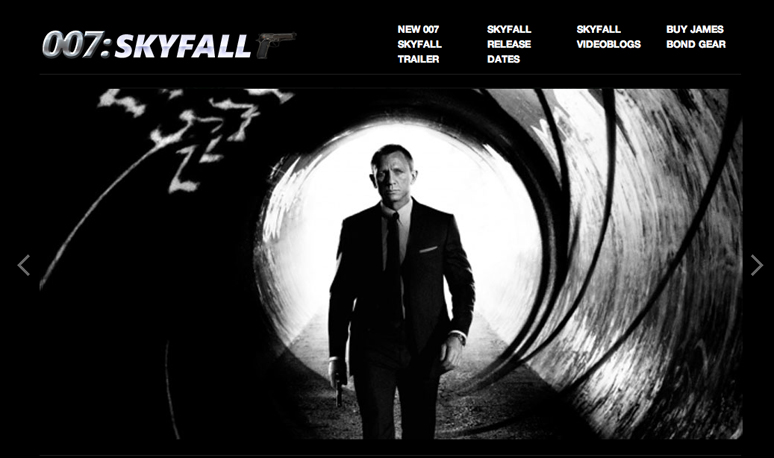 The buzz right now is all around the latest Bond film, Skyfall. Check out the trailer and more (http://007skyfall.com) Skyfall opens across Canada tomorrow.